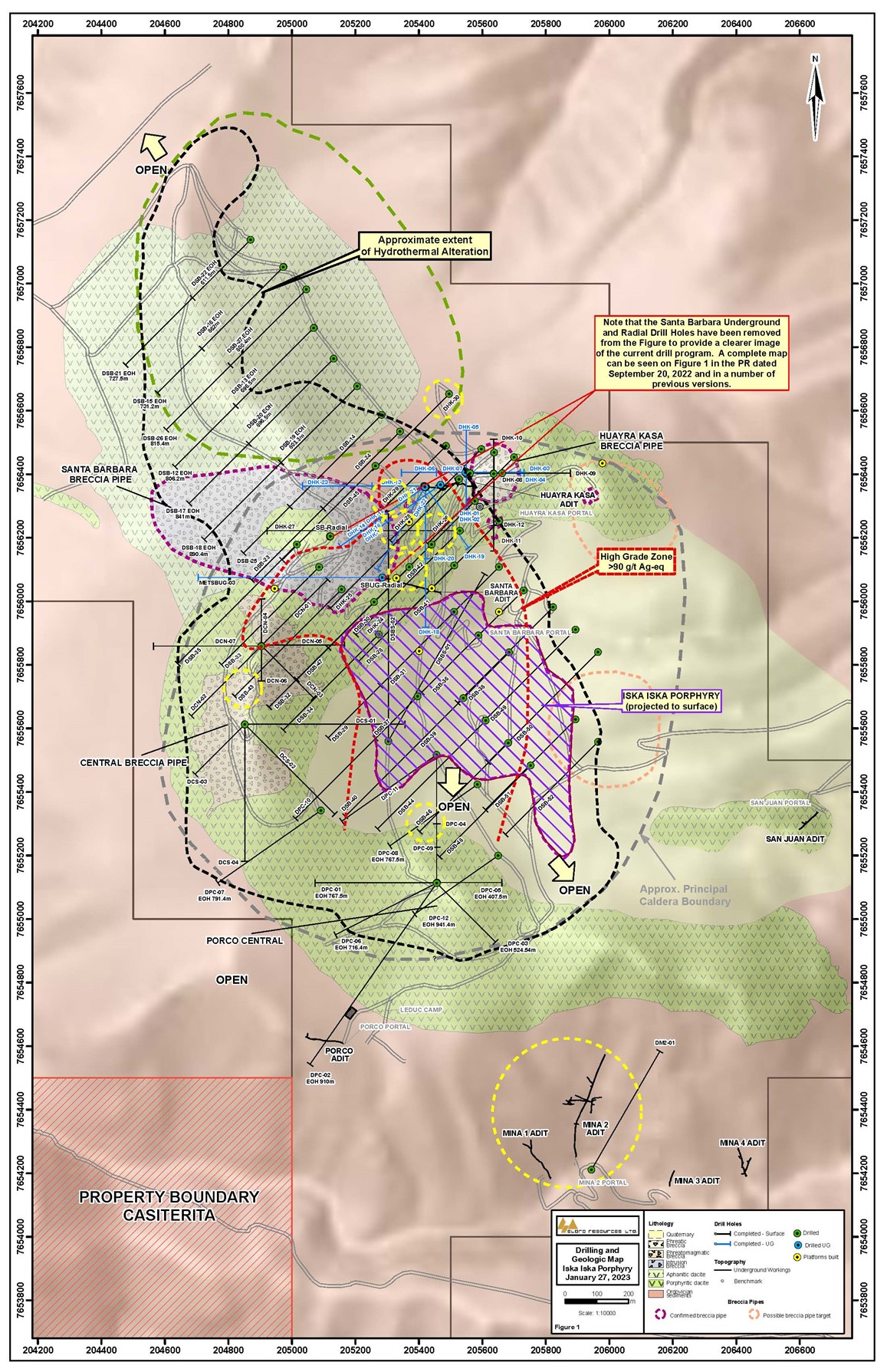 Eloro Resources Ltd. (TSX-V: ELO; OTCQX: ELRRF; FSE: P2QM) (“Eloro”, or the “Company”) is pleased to announce assay results from eight (8) additional diamond drill holes from its definition drilling program at the Iska Iska silver-tin polymetallic project in the Potosi Department, southern Bolivia. Hole DHK-27 was drilled from Huayra Kasa due west at -45 degrees to a length of 860m to fill-in gaps in previous drilling of the High-Grade Zone. Five (5) additional holes (DHK-26. DHK-28, DHK-29, DHK-30 and DSB-42) were drilled to the southwest from the Huayra Kasa area to test the eastern margin of the Santa Barbara deposit. Hole DSB-43 was drilled on southwest side of Santa Barbara and hole DSB-46 tested the potential south-southeastern extension. read more

Eloro Resources Ltd. (TSX-V: ELO; OTCQX: ELRRF; FSE: P2QM) (“Eloro”, or the “Company”) is pleased to announce assay results from two (2) additional diamond drill holes from its on-going drilling program at the Iska Iska silver-tin polymetallic project in the Potosi Department, southern Bolivia. Hole DSBU-10 is an underground hole drilled at azimuth 400 at -600 dip across the higher-grade feeder zone. Hole DHK-24 is a surface drill hole collared near Huayra Kasa approximately 100m SE of Hole DSBU-10 and drilled to the SW at -600. Four drills including three surface drills and one underground drill are focussed on completing drilling in the Santa Barbara Resource Definition Drilling Area. A fourth surface drill has been added to further expand drilling capacity. read more

Tom Larsen, CEO of Eloro Resources (ELO.V), knows that the company’s Iska Iska silver tin deposit in Bolivia is big. Just how big is being delineated with a significant drilling program. A full 43-101 mineral resource is expected in Q3 of 2022. read more

Eloro Resources Ltd. (the “Company” or “Eloro“) (TSXV: ELO) (OTCQX: ELRRF) (FSE: P2QM) is pleased to announce that in connection with its previously announced bought deal financing, the Company and Cormark Securities Inc., (the “Underwriter“) have agreed to increase the size of the previously announced financing. The Underwriter has agreed to purchase, on a bought deal basis, 2,615,400 units of the Company (the “Units“) at a price of C$3.25 per Unit for gross proceeds to the Company of approximately C$8.5 million (the “Offering“). Each Unit will consist of one common share in the capital of the Company (each a “Common Share“) and one-half of one common share purchase warrant (each whole warrant, a “Warrant“) of the Company. Each Warrant shall entitle the holder to acquire an additional Common Share at a price of C$4.75 for a period of 24 months following the closing of the Offering. read more

It can take the market a day or two to actually understand a technical press release. On March 1, 2022, Eloro Resources (ELO.V) put out a news release which needed to be carefully read to reveal a significant intersection with heavily mineralized rock over 373 meters at its Iska Iska property in Bolivia. This intersection is particularly important because, while it certainly contains silver, it has an abundance of tin. read more

Eloro Resources Ltd. (TSX-V: ELO; OTCQX: ELRRF; FSE: P2QM) (“Eloro”, or the “Company”) is pleased to provide an update on its Iska Iska silver-tin polymetallic project in the Potosi Department, southern Bolivia. To date, the Company has completed 34,409 metres (m) in 64 drill holes including three (3) in progress to test major target areas at Iska Iska. This press release reports drilling results from one (1) additional hole which tested the Santa Barbara Breccia Pipe (“SBBP”) (Hole DHK-23) and two holes (DCN-05 and DCS-03) which tested the Central Breccia Pipe target (“CBP”). To date, every drill hole that has been assayed has returned multiple reportable mineralized intercepts. Currently three drill rigs are in operation at Iska Iska. Two surface drill rigs are continuing to drill at SBBP to outline an initial National Instrument 43-101 (“NI-43-101”) compliant resource. A third drill, an underground rig, situated in the west end of the Santa Barbara Adit, is testing the eastern part of SBBP and its mineralized envelope. Figure 1 is a geological plan map showing locations of drill holes and an updated geological interpretation. Table 1 provides significant drilling results with definitions of chemical symbols and Table 2 lists holes completed with assays pending, as well as holes in progress in the three major target areas. Highlights are as follows: read more