The Company has completed 53,445m in 83 drill holes, including three holes in progress, as shown in Figure 1. Table 1 lists significant assay results from holes METSBUG-01 and DSB-25. Prices used for calculating Ag equivalent grades are as outlined in Eloro’s February 1, 2022, press release. Table 2 summarizes drill holes with assays pending. Highlights are as follows:

As shown in Figure 2, a SW-NE cross section looking northwest, hole METSBUG-01, along with previously released drill holes METSBUG-02 (see Eloro’s February 23, 2022 press release) and DSBU-03 (see Eloro’s March 1, 2022 press release) define a major high grade mineralized area that extends across a width of approximately 600m to a depth of a least 600m and is open along strike to the northwest and at depth. It is significant to note that hole METSBUG-01 was mineralized from top to bottom and terminated in mineralization.

Tom Larsen, CEO of Eloro, commented: “We are continuing to intersect wide areas of higher-grade mineralization which will enhance our planned inaugural National Instrument 43-101 mineral resource estimate. Longer holes are planned in this very prospective area of the Santa Barbara target to better define the full extent of the higher-grade areas which remain open both along strike and downdip.”

Dr. Bill Pearson, P.Geo., Eloro’s Executive Vice President Exploration, added: “We are continuing to expand the extent of the remarkable silver-tin polymetallic mineralized system at Iska Iska. Additional holes are in progress to test the downdip and along strike extent of the high-grade zone in the southeastern part of the Santa Barbara target area. Drilling is also in progress, as outlined in the Eloro press release of March 1, 2022, to test the major targets in the Porco area indicated by the 3D inverse magnetic susceptibility model.”

Dr. Osvaldo Arce, P.Geo., General Manager of Eloro’s Bolivian subsidiary Minera Tupiza S.R.L. (“Minera Tupiza”), further commented: “Recent assays from drillholes METSBUG 1 and 2 and DSBU-03 have intersected highly enriched zones of Sn, Ag, Pb and Cu with local Au and Bi in stockworks, disseminations and a variety of breccia types including both volcanic explosive and later structurally controlled breccias. The strength and intensity of mineralization in these holes along with the elevated magnetic susceptibility which extends much further along strike and downdip suggests the possibility of a major feeder in this area.”

S = Surface UG=Underground; collar coordinates in metres; azimuth and dip in degrees. Total drilling completed since the start of the program on September 13, 2020 to December 17, 2021 is 40,468 m in 73 holes (26 underground holes and 47 surface holes). From re-start of drilling on January 17, 2022, an additional 12,977m has been completed bringing the overall total to 53,445m in 83 drill holes (28 underground drill holes and 55 surface drill holes) including 3 holes in progress.

Drill core samples sent to AHK Laboratories are prepared in a preparation facility installed and managed by AHK in Tupiza with pulps sent to the AHK laboratory in Lima, Peru. Au and Sn analysis on these samples is done by ALS Bolivia Ltda in Lima. Check samples between ALS and AHK are regularly done as a QA/QC check. AHK is following the same analytical protocols used as with ALS and with the same QA/QC protocols. Turnaround time continues to improve and it is hoped that most of the sample backlog will be cleared in the next 4-6 weeks.

Since the initial discovery hole, Eloro has released a number of significant drill results in the SBBP and the surrounding mineralized envelope which along with geophysical data has defined a target zone 1400m along strike, 500m wide and that extends to a depth of 600m. This zone is open along strike to the northwest and southeast as well as to the southwest. The Company’s nearer term objective is to outline a maiden NI 43-101 compliant mineral resource within this large target area. This work is advancing well with the mineral resource targeted to be completed in Q2 2022. Exploration drilling is also planned on other major targets in the Iska Iska Caldera Complex including the Porco and Mina 2 areas. 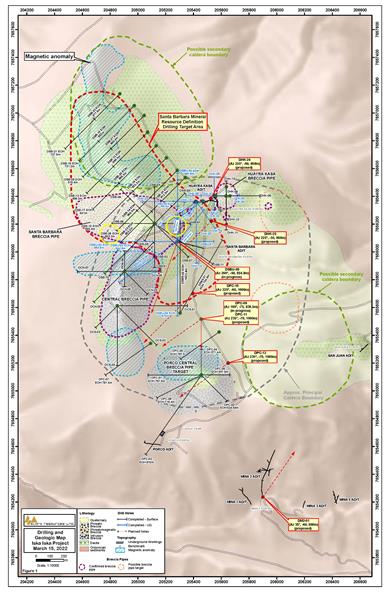 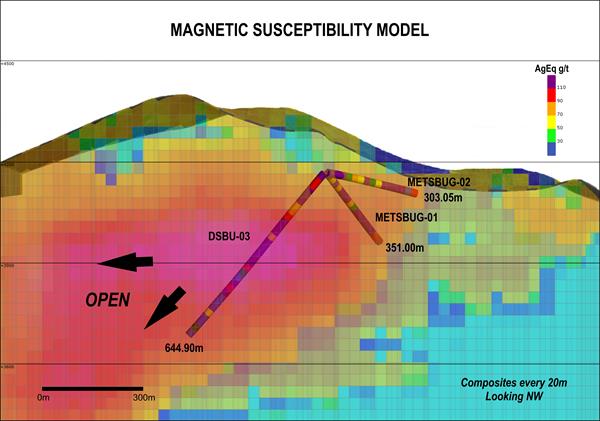