Eloro Resources Ltd. (TSX-V: ELO; OTCQX: ELRRF FSE: P2QM) (“Eloro”, or the “Company”) is pleased to provide an update on its Iska Iska silver-tin polymetallic project in Potosi Department, southern Bolivia. To date, the Company has completed 43 diamond drill holes totalling 20,030 metres (m) to test major target areas at Iska Iska. This press release reports drilling results from four (4) additional holes which tested the Santa Barbara Breccia Pipe (“SBBP”) and Central Breccia Pipe (“CBP”). To date, every drill hole that has been assayed has returned multiple reportable mineralized intercepts. Currently three drill rigs are in operation at Iska Iska. One surface drill rig is completing first pass drilling of the CBP from the northern radial platform and a second surface drill is testing the major Porco (South) Target. The third drill, an underground rig, is testing the northeast part of SBBP and its mineralized envelope. Figure 1 is a geological plan map showing locations of drill holes and an updated geological interpretation. Figure 2 is a more detailed geological plan map of the SBBP and CBP areas. Figure 3 is a NW-SE geological section along the northwestern part of the CBP and the eastern part of SBBP showing locations of the main mineralized zone and of drill holes DSB-08, DSB-10 and DCN-2 in this release. Figure 4 shows the currently interpreted metal zoning pattern on this same section. Table 1 provides significant drilling results and Table 2 lists holes completed with assays pending as well as holes in progress in the three major target areas. Highlights are as follows:

Dr. Bill Pearson, P.Geo., Eloro’s Executive Vice President Exploration, stated: “We are continuing with our strategy of completing first pass drilling from both surface and underground to test major target areas of the SBBP, CBP and Porco (South). Targets drilled to date cover an area 2km long by 1.2km wide with additional targets further east in the caldera complex still to be tested, as shown in Figure 1. All holes drilled to date have intersected significant mineralization and it is becoming clearly evident that the Iska Iska mineralizing system is zoned both laterally and vertically. Mineralization at SBBP is more intermediate style polymetallic Ag-Zn-Pb-Sn, whereas recent results from the CBP suggest a deeper level higher temperature tin-dominant system. We are currently carrying out a down-hole induced polarization (IP) survey which will aid in determining the distribution of mineralization especially potential higher-grade areas which tend to have more sulphides. Currently we have approximately 2,600 samples in the laboratory pending analysis. ALS Global in Lima, Peru has advised us that they are gradually returning their operations to a more normal basis as the COVID-19 situation improves.  The backlog of samples has now been stabilized and they anticipate that in the next 4-6 weeks the sample back log will be significantly reduced allowing the laboratory to return to more normal turnaround times.  The preparation facility in Oruro continues to operate at normal compacity.”

Dr. Osvaldo Arce, P. Geo., General Manager of Eloro’s Bolivian subsidiary, Minera Tupiza S.R.L. and an expert on the geology of Bolivian mineral deposits said: “Diamond drilling at Iska Iska to date allows us to define a preliminary lateral and vertical metal zoning model in this large km-scale mineralized polymetallic system. This zoning is from a higher temperature core characterized by Sn moving outward to Sn (W-Au-Bi), Sn-Ag (Bi), Ag−Zn-Pb-(Sn-Au-Cu), and finally Zn-Pb-Au. These zones are arranged according to a decrease of temperature of deposition and increasing distance from the presumed heat source that is likely a Sn porphyry at depth. Mineralization can be telescoped depending on the geochemical environment, the character of metal-forming solutions and the extent of subsequent structural overprinting and remobilization. Remobilization is likely responsible for producing significant areas of high-grade mineralization within the more extensive lower grade envelope.”

Dr. Arce continued: “Drill hole DSB-10, drilled in the SBBP and crossing into the CBP at depth, intersected primarily tin mineralization corresponding to the highest temperature and deeper part of the mineralizing system. The tin intersections have local silver and gold values that likely belong to the edge of a higher-level epithermal event. The strong tin mineralization is widely distributed in this hole with the best intersection being 0.325% Sn over 56.2m which included a 28.86m section grading 0.535% Sn. Although not continuous a total of 211.34m cumulative intersections of Sn mineralization were obtained in the lower part of hole DSB-10 collectively grading 0.22% Sn (102.27 Ag eq/t). These higher-grade intersections have a distinctive alteration of tourmaline, silicification and jarosite within a much broader pervasive alteration of tourmaline and silicification with anomalous values of Sn. These grades of tin are comparable to grades reported for other well-known tin deposits in Bolivia including Llallagua, Huanuni and Chorolque.”

Finally, Dr. Arce noted that: “Hole DPC-01, the first hole drilled in the Porco target zone, intersected 767 meters of an intercalation of mineralized granodiorite and intrusion breccia with aphanitic dacite and sandstone clasts which confirmed that Porco is likely a major breccia pipe. The last 72m of this hole intersected medium to coarse granodiorite which is still mineralized. Mineralization in this hole is related to breccia veins, veins and veinlets of pyrite, cassiterite, tourmaline, chalcopyrite, sphalerite, galena, pyrrhotite, siderite and alunite collectively up to 7%. Assays on this hole are pending but the potential metal contents appear to be more comparable to the higher level SBBP than the deeper level CBP. As previously reported (March 29, 2021), channel sampling of the Porco adit located approximately 200m to the south of the Porco breccia pipe target (Figure 1) returned a 50m strike length averaging 519.35 g Ag eq/t (236.13 g Ag/t, 1.89g Au/t, 0.2% Bi, 0.87% Cu, 0.31% Pb and 0.055% Sn) over an average channel width of 2.5m supporting this conclusion.”

Dr. Quinton Hennigh, Senior Technical Advisor to Eloro commented: “Every hole drilled at Iska Iska to date has encountered multiple mineralized intercepts. Porco, the most recently tested target, is yielding visible indications of long mineralized intercepts. Even though we have now drilled numerous holes within an area 2km north-south and 1.2km east-west, we have yet to find the ultimate limits of this immense system. Every hole displays hydrothermal alteration and zones of mineralization. While it is becoming clear that mineral zonation is present within this huge system, there is still a lot of work to do to fully determine such patterns. It is entirely possible that there are multiple magmatic drivers within this immense complex. It is truly exciting to see continued discovery with every hole that is completed.”

Note: True width of the mineralization is not known at the present time, but based on the current understanding of the relationship between drill orientation/inclination and the mineralization within the breccia pipes and the host rocks such as sandstones and dacites, it is estimated that true width ranges between 70% and 90% of the down hole interval length but this will be confirmed by further drilling. Percentage metal contents are shown for each element.

Table 2: Summary of Diamond Drill Holes Completed with Assays Pending and Drill Holes in Progress at Iska Iska from press release of July 6, 2021.

S = Surface UG=Underground; collar coordinates in metres; azimuth and dip in degrees
Total drilling completed since the start of the program on September 13, 2020 is 20,030m in 43 holes (17 underground holes and 26 surface holes) with one underground and two surface holes in progress.

Drill samples are prepared in ALS Bolivia Ltda’s preparation facility in Oruro, Bolivia with pulps sent to the main ALS Global laboratory in Lima for analysis, As announced in the February 26, 2021 press release, Eloro has changed the assay protocol to utilize X-ray fluorescence (XRF) to more accurately analyze higher Sn. Tin in the CBP is suspected to occur as cassiterite which is insoluble in acid digestion, and therefore not suited for wet chemical techniques. In addition, other assay protocols have been changed to provide for a more accurate measurement of the wide-ranging suite of polymetallic metals at Iska Iska. Eloro employs an industry standard QA/QC program with standards, blanks and duplicates inserted into each batch of samples analyzed with selected check samples sent to a separate accredited laboratory.

Unfortunately, the ALS Global laboratory in Lima where the Iska Iska samples are being analyzed has had major delays in turnaround time due to the impact of the COVID-19 lockdown of Lima by the Peruvian government. This has restricted availability of critical supplies necessary to carry out analytical work. As a result, there will be delays in reporting of assay results.

Iska Iska silver-tin polymetallic project is a road accessible, royalty-free property, wholly-controlled by the Title Holder, Empresa Minera Villegas S.R.L. and is located 48 km north of Tupiza city, in the Sud Chichas Province of the Department of Potosi in southern Bolivia. Eloro has an option to earn a 99% interest in Iska Iska.

Currently three diamond drill rigs are active at Iska Iska, two surface rigs and one underground drill. Planned drilling for 2021 is 51,000m with the aim of outlining an initial inferred NI 43-101 mineralization by late fall. A ground magnetic survey was recently completed over the property and an induced polarization survey will commence shortly to further define drill targets. Preliminary metallurgical tests are also in progress. An updated NI 43-101 Technical Report is being prepared by independent consultant Micon International Ltd. 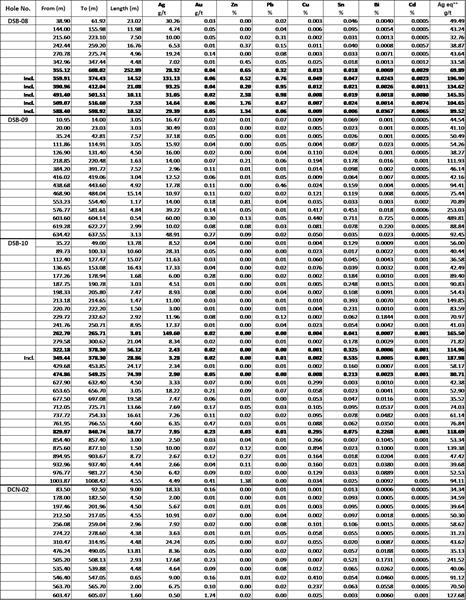 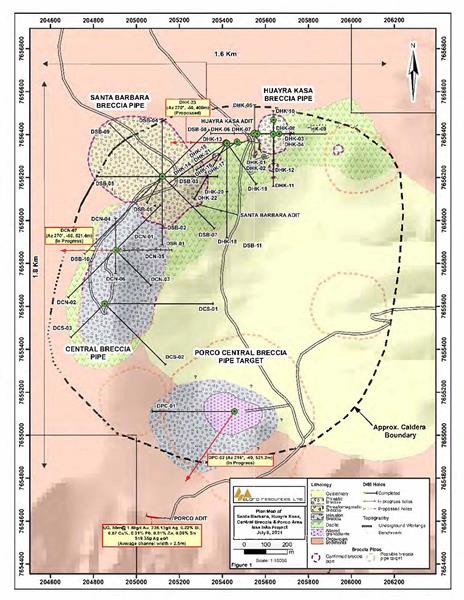 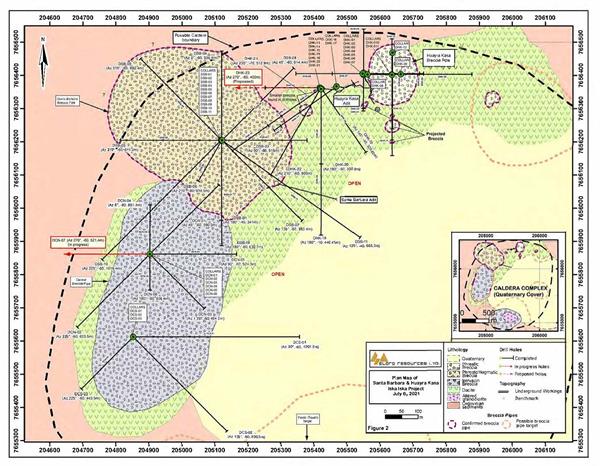 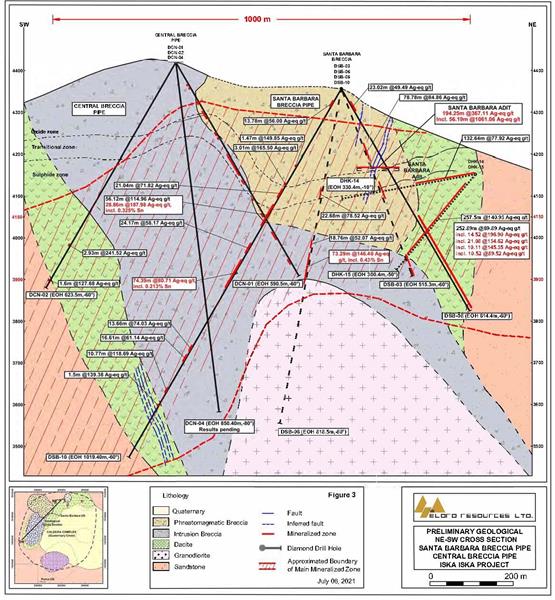 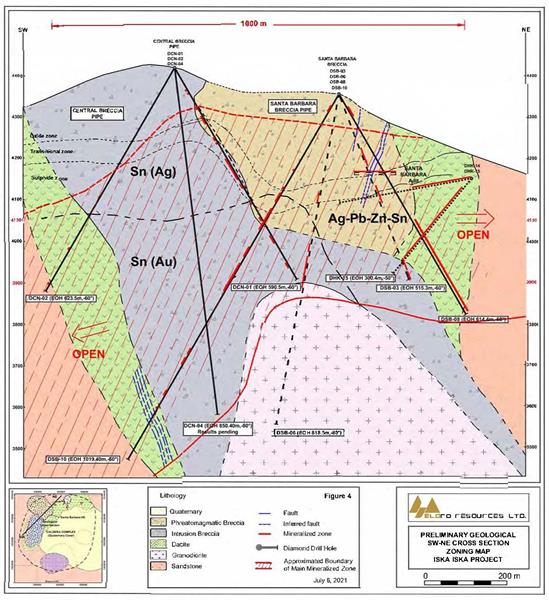 As ever, Renforth Resources (CNSX:RFR.CN)...