Underground hole DSBU-03, collared in the Santa Barbara adit and drilled at an azimuth of 270 degrees at -50 degrees dip, intersected significant mineralization including substantial tin suggesting proximity to a major intrusive source (Figures 1, 2 and 3 and Table 1):

Tom Larsen, CEO of Eloro, commented: “This new underground hole is the longest and highest-grade intersection obtained thus far in our diamond drill program and further highlights the major potential of the Santa Barbara target area to host significant higher-grade mineral resources, especially with tin. In order to more aggressively drill this major new extension of the Santa Barbara deposit, a third surface diamond drill is being brought onto site bringing the total operating drills to four (3 surface and 1 underground).

Dr. Bill Pearson, P.Geo., Eloro’s Executive Vice President Exploration, added: “The 3D inverse magnetic susceptibility model is proving to be an important indicator for targeting areas of potential tin mineralization at depth. Work by Dr. Arce and his geological team indicates that in deeper levels tin occurs as cassiterite associated with pyrrhotite which is magnetic. Tin at higher levels is associated with silver, which likely has been remobilized, and generally occurs with pyrite that is non-magnetic.” “In addition to the outstanding drill results, work is moving forward on the metallurgical testing with Blue Coast Research Ltd. We are also working closely with Micon International Limited to develop appropriate parameters for the mineral resource estimation. The bore hole induced polarization program is continuing with additional holes being surveyed to expand our coverage and determine the continuity of mineralization between drill holes. The GeologicAI scanner is expected to be on site and fully operational by the end of March.”

“The entire package has been subjected to later deformation and remobilization which has substantially altered many of the primary relationships. The southern area of Santa Barbara where we already have two impressive holes with 300m+ long intersections and southeast to the Porco area appears to be the potential centre of the porphyry-epithermal system. We are now on our 81st hole and all holes reported to date have multiple reportable intersections, which is remarkable. The system remains open along strike to the northwest and to the southeast. Geological mapping and diamond drilling suggest that the potential strike length of the entire system may be as much as 4km, the width up to 2km, with a depth extent of 1km or more.”

S = Surface UG=Underground; collar coordinates in metres; azimuth and dip in degrees. Total drilling completed since the start of the program on September 13, 2020 to December 17, 2021 is 40,468 m in 73 holes (26 underground holes and 47 surface holes). From re-start of drilling on January 17, 2022, an additional 5,311m has been completed bringing the overall total to 45,779m in 81 drill holes (27 underground drill holes and 54 surface drill holes) including 3 holes in progress.

Figure 3: 3D Inverse Magnetic Susceptibility Model Showing How Hole DSBU-03 Intersected the Northern tip of this Massive Anomaly that extends to the Southeast from the Santa Barbara area to beneath the Porco area.
https://www.globenewswire.com/NewsRoom/AttachmentNg/389e27fe-e2aa-4157-bb36-ea1723bfed63

Drill core samples sent to AHK Laboratories are prepared in a preparation facility installed and managed by AHK in Tupiza with pulps sent to the AHK laboratory in Lima, Peru. Au and Sn analysis on these samples is done by ALS Bolivia Ltda in Lima. Check samples between ALS and AHK are regularly done as a QA/QC check. AHK is following the same analytical protocols used as with ALS and with the same QA/QC protocols. Turnaround time continues to improve and it is hoped that most of the sample backlog will be cleared in the next 4-6 weeks.

Since the initial discovery hole, Eloro has released a number of significant drill results in the SBBP and the surrounding mineralized envelope which along with geophysical data has defined a target zone 1400m along strike, 500m wide and that extends to a depth of 600m. This zone is open along strike to the northwest and southeast as well as to the southwest. The Company’s nearer term objective is to outline a maiden NI 43-101 compliant mineral resource within this large target area. This work is advancing well with the mineral resource targeted to be completed in Q2 2022. Exploration drilling is also planned on other major targets in the Iska Iska Caldera Complex including the Porco and Mina 2 areas. 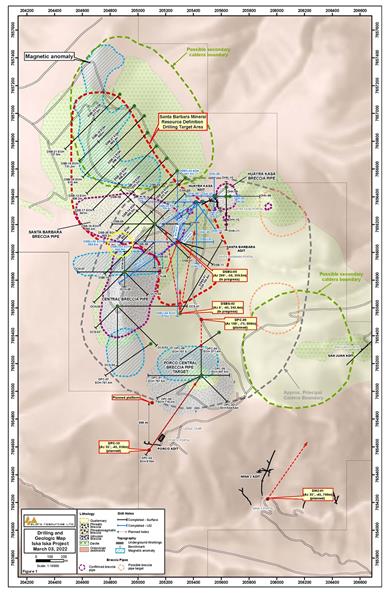 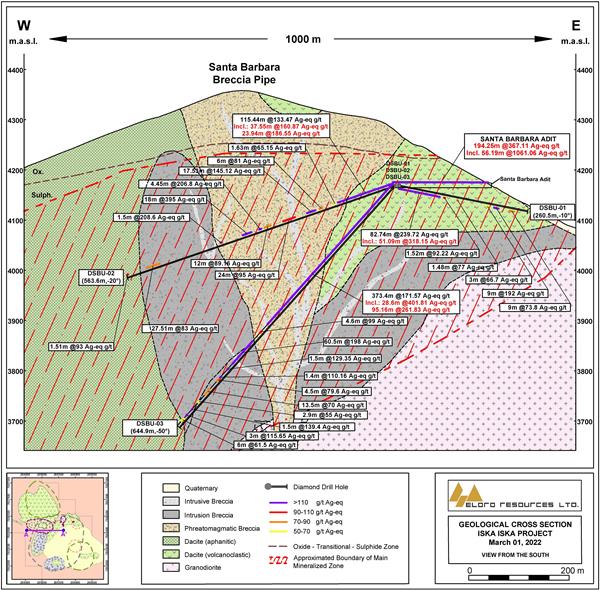 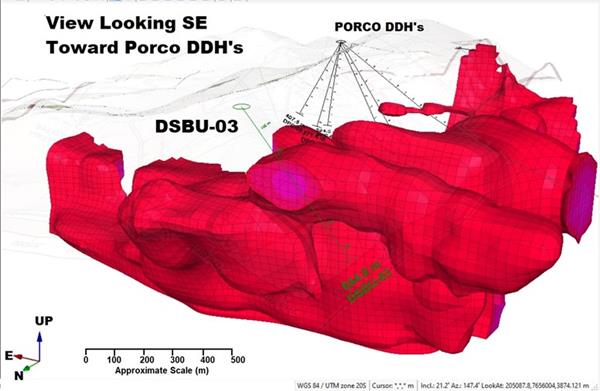